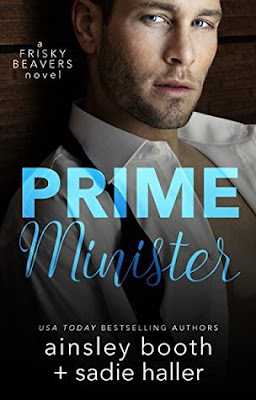 Gavin: Ellie Montague is smart, sensitive, and so gorgeous it hurts to look at her. She's also an intern in my office. The office of the Prime Minister of Canada. That's me. The PM. She calls me that because when she calls me Sir, I get hard and she gets flustered, and as long as she's my intern, I can't twists my hands in her strawberry-blonde hair and show her what else I'd like her to do with the pretty pink mouth.

Ellie: How much I like the PM varies on a daily basis. He's intense, controlling, and a perfectionist in every way- and he demands the same of his staff. How much I want him never wavers. There's something about him that tugs ate me deep inside, and makes me wish that just once he'd cross the line in a late night work session. I'd take that secret to the grave if it meant I got a taste of the barely restrained beast inside him.

First, I must say that I haven't been this smitten with anyone since Gideon Cross and Gavin exceeded him in so many ways! This is definitely in my Top 10 books EVER!!!
This story was brilliantly written and had me blushing often. The characters were very relatable and was hard for me to put down. One word that fits very well is SCANDALOUS!! I was rooting for Gavin and Ellie and their budding romance. Gavin had his "taste" and Ellie wanted it just as much as he did.
I fell in love with the characters and all their faults. The story flowed really well and was easy to follow. I definitely plan on continuing this series and whatever books these two authors have written!