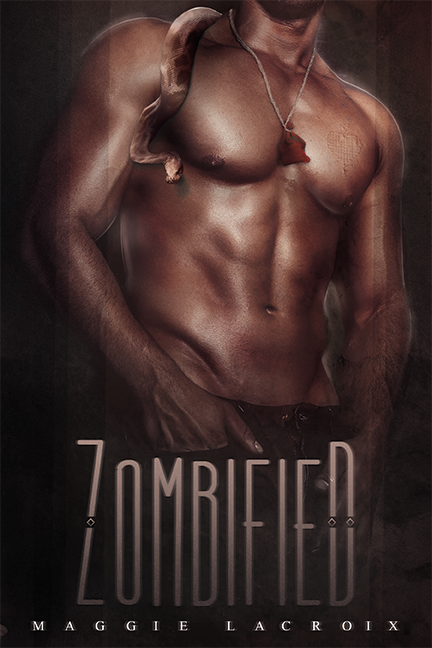 Monsters generally know their place: vampires get to be sexy while zombies just decompose. But Maggie La Croix’s Zombified conjures up an entirely different kind of undead raised by good old-fashioned Voodoo. These gorgeous walking corpses don’t eat brain, they don’t stagger, and their bodies are spared the indignities of putrefaction.

Take Henri Jolicoeur. More than one hundred years after his death he is still a bewitching Adonis. But zombification does have its downsides. Henri has a master, a powerful Voodoo priest whose spells keep Henri, his teenage zombie sister, and five other poor souls in perpetual servitude.

That is, until a hurricane devastates their New Orleans home and the zombies are evacuated to the Texas border town of El Paso. The curse is broken. They are free and intend to stay that way. But how can they pass for human when they don’t eat or sleep and they’re reeling from black magic withdrawal? If that isn’t enough, they have a traitor in their midst, their master is hot on their trail, and a mysterious stranger in black is watching.

Enter Josie Cortez, a cowboy boots-wearing reporter at the local newspaper who desperately needs a good story to save her moribund career and get her editor off her back. One look at Henri and his weird little family and she knows she’s struck journalism gold. But strange things keep happening around Henri, things that remind Josie of her own tragic family history with black magic, a history that cost her her beloved mother and led Josie straight to the bottom of a bottle. Josie would rather forget all about that. Forgetting Henri, however, is easier said than done, even if falling for a man without a heartbeat could get her more than a broken heart. It could get her zombified.

When she first embarked in fiction writing, Maggie thought, Piece of cake. After all, she’d been a newspaper reporter for ten years; writing was her daily bread. But Zombified, her first novel about a band of sexy zombies, was anything but easy. The story wasn’t conveniently laid out for her at a press conference; it had to be coaxed out of her own imagination. Plot points resisted solving, descriptions meandered, and characters misbehaved. But just when things seemed bleakest, it happened. Maggie fell in love with it all: the zombies, the love story, and even the rituals of writing.

Maggie likes her leading women flawed and her science fiction sexy. She went to school for journalism and political science. She lives in the United States.

Mention zombies and the first thing you tend to think of is one of the creatures on The Walking Dead, not smokin’ hot gigolos. In her debut novel, Zombified, set in the devastation post-Hurricane Katrina, Maggie LaCroix has managed to create a world of attractive Creole revenants, forced to do the bidding of an evil voodoo master.

When down-on-her-luck journalist Josie Cortez is assigned to cover the arrival of the Katrina refugees in her Texas town, she gets more than just a front-page story. Her attraction to the gorgeous man with the strange eyes, Henri Jolicoeur, leads her into the kind of danger she could never have imagined.

Zombified is unique, fast-paced, and quite humorous in places. Just one look at that cover tells you this is not your usual zombie story.
~Andrea from Books, Baking and Other Objects of Beauty