The Hand That Feeds by Michael Garza│Review 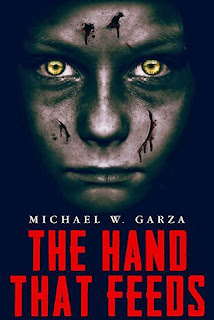 How far would a parent go to keep their child alive?

John and Angela Mason's lives are brought to a tormenting halt when their ten year old son is reduced to a lifeless shell. John watches his wife slip into madness as his son rises from the dead. He realizes they must escape the terrifying infection in order to survive but how can he choose between the insanity consuming his wife and the undying hunger of his son.

An appetite for death will come in one form or another and it will be left ot John to decide on the hand that feeds.

I was given an ARC of this by the author and asked for a honest review.

First things first...I went into this knowing that it was about Zombies and knew that there was great potential for scaring the crud out of me. I have never been able to watch or read anything with Zombies because I can't handle the gore and horror of it.

I was ready to take a leap into this book, feeling that I could get through it. It was a book and I wouldn't have to see the gore that comes with the territory of zombies. I was sooo wrong!

This book was very hard for me to finish. Not because of the writing or the story line, because both were excellent! The characters were strong and I couldn't find anything wrong with them or this story. The only thing that I had a problem with, was getting through it because of the horror and gore that was described in it. Everything that I would expect to be in a book of this genre, lived up to my expectations and beyond!

There were moments when I wanted to scream at the characters, especially Angela because of her actions. All the emotions that her and John went through with the state of their son were honest and believable. I truly understood why they did or didn't do things that seemed logical. Nothing about this situation was logical or typical.

I look forward to reading more of Michael's books.