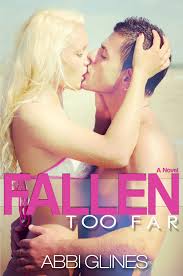 ♥Synopsis♥
To want what you're not supposed to have...

She is only nineteen.

She is his new stepfather's daughter.

She is still naive and innocent due to spending the last three years taking care of her sick mother.

But for twenty-four year old Rush Finlay, she is the only thing that has ever been off limits. His famous father's guilt money, his mother's desperation to win his love, and his charm are the three reasons he has never been told no.

Blaire Wynn left her small farmhouse in Alabama, after her mother passed away, to move i with her father and his new wife in their sprawling beach house along the Florida gulf coast. She isn't prepared for the lifestyle change and she knows she'll never fit into the world. Then there is her sexy stepbrother who her father leaves her with for the summer while he runs off to Paris with his wife. Rush is as spoiled as he is gorgeous. HE is also getting under her skin. She knows he is anything but good for her  and that he'll never  be faithful to anyone. He is jaded and has secrets Blare knows she may never uncover but even knowing all of that...

Blaire just may have fallen too far.

19 yr old Blaire lives in Alabama and she just buried her mother, who had recently died of cancer and has now where to go. Her estranged father tells her that she can come stay with him and his new family in Rosemary Beach, Florida while she figures it out.

Once Blaire arrives at the address which her father gave her, she soon learns that the house actually belongs to her stepbrother, Rush and that her father is actually out of the country with his new wife. Blaire and Rush don't hit it off at first and she soon finds out that Rush likes her father about as much as she does.

Blaire is happy to stay in a motel, but Rush ends up letting her stay in his mother's maids room, which happens to be through the pantry and under the stairs. Blaire is thankful that she has a roof over her head and plans to get a job, so she can move out of Rush's house.

Living under the same roof, Blaire is bound to run into Rush and his many conquests in awkward situations and the tension between the two of them starts to heat up.

Not long after meeting, Blaire and Rush get under each others skin, and Rush becomes very possessive and protective of Blaire, while knowing that Blaire is off limits for a reason. One big reason, is Rush's sister Nan.
.
There is a secret that is being kept from Blaire and everyone else in Rosemary seems to know what this secret is.

This secret will rock Blaire's world and change it as she knows it...as well as cost any future she may had hoped for with Rush..

I really liked the plot and characters. it was an easy read and held my interest throughout the book. I  was a little angry with the ending though. I didn't care  with Blaire's choice.

I would definitely recommend this book if you like mystery and romance. This is very fast paced and there wasn't a slow page in this book.This story was interesting to say the least

My favorite quotes from Fallen Too Far


♥"Blaire, even if all we do is kiss or just lay there and talk, I'm okay with that. I just wanted you up here. Close to me."
-Rush

♥"I don't want you under those stairs. I hate it. But I can't move you up here. I'll never be able to stay away from you. I need you safely tucked away." -Rush

♥"Talk. We're going to talk first. I want to see you smile and laugh. I want to know what your favorite show was when you were a kid and who made you cry at school and what boy band you hung posters of on your wall. Then I want you naked in my bed again." -Rush

♥"He wasn't what sent me running. He was what had made me want to stay." -Blaire

♥"The love she left behind will be dreams are reached. She was the rock in a world that was crumbling. Her strength will remain. It's in our hearts."
Posted by BookTalkWithJess at 10/05/2013