Crashing Into You by B.D. Rowe│Review 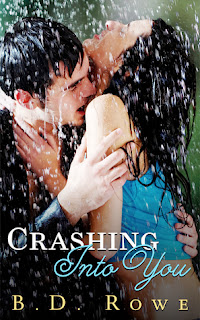 Bookish college sophomore Sydney Baker wants Evan Taylor with every ounce of her being. The hottest stud on campus. Evan is six foot four, ripped, stacked with muscles. He's even easy to talk to.

But when Melanie tragically dies after a night of wild partying, Sydney and Evan turn to each other in a time of intense grief. And it doesn't take long for their close friendship to blossom into something more.

Unfortunately for Sydney, secrets from the past soon put her relationship with Evan to the test. Especially when a sexy blonde freshman makes her way into Evan's life, and tries to rip away everything Sydney holds close to her heart.

I received this book from Netgalley in return for an honest review.

The synopsis of this book sounded very intriguing and drew my attention in. I didn't LOVE this book, but I thought it was good

Sydney, who is in college is plagued with a tragic incident that happened when she was in high school htat has followed her to college. This tragic event is driven throughout the book and tends to drive Sydney's outlook on life and partying.

Sydney as a massive crush on her roommate, Melanie, boyfriend who seems to have feelings for here. There seems to be a love/hate relationship with Sydney and Melanie. It's hard to determine if they are actually friends or just friendly because they live together.

Several major events, such as Melanie tragically dying after a night of partying which leads to Sydney and Evan getting together due to their grieving process over Melanie, that leads to a new girl entering Evan's life. This girl can definitely cause some problems with Evan and Sydney. She can even end their relationship.

I liked the plot, however it seemed repetitive as well as time consuming on certain subjects. It was almost like there was too much time spent explaining or extending events and relationships that were not detrimental to the story. There was a lack of development in the plot as well as the characters.

I think this has the potential to be an amazing book, if it undergoes some revising and making the story and characters flow more natural that will help link all the events together.