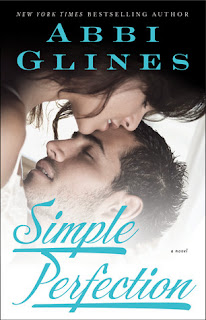 Woods had his perfect life mapped out for him. Rise up the ranks of the family business. Marry the rich girl of his parents’ dreams. Pretend that wealth and privilege was all he’d ever wanted. Then a girl named Della breezed into town, a beautifully imperfect stranger who captured his heart and opened his eyes to a new kind of future. Woods is ready and willing to sacrifice everything for her when the sudden death of his father leaves him with his mother to care for and a business to manage.Della is determined to be strong for Woods, even as she’s quietly falling to pieces. No matter how far from home she’s run, the ghosts of her past have never stopped haunting her. Struggling to hide her true feelings from Woods, Della fears she can’t be his rock without dragging him down into the darkness with her. But is she strong enough to let go of the last thing holding her together?

Abbi sure did through us a curve ball with Simple Perfection! This book had all the feels and then some when compared to her other books. I felt like an emotional wreck with this one.
This starts about 1 week from the place that Twisted Perfection left of. One thing I really liked, was you were able to get to see more of the fight between Della and Angelina had when Blaire (Forever Too Far) came in and saved the day.
Della and Woods are happy and trying to figure things out. Della has all her self doubts that she isn't good enough for Woods when Woods feels that he can't breath if Della isn't at his side.
Woods is trying to figure out how to protect Della from anything and everything because he knows how fragile she is with her past and wants to do nothing but help her and love her.
I think Della's character has the most growth in this book and she learns some things about her past that she had no clue of and this information helps her out tremendously with her fears.
We are introduced to new characters with Della and get a little more insight some of the situations from Della's childhood.
Lots of things happen in Simple Perfection and we get to see a lot of characters, especially Blaire, Rush and Nate which is always nice. There will be things that happen which you will not see coming and there are new situations that have not shown up in Abbi's writing from the her books that I have read. I could be wrong about this!!!
We are also given glances and setups for Grant's book and possibly some others such as Tripp and a certain character that I will not mention.
I don't want to give any spoilers so I won't say anything else.
If you haven't read any of the Rosemary Beach Books, I strongly recommend you get on that because you will fall in love with these characters as much as I have!