Rebecca’s Lost Journals, Volume 4: My Master (Inside Out #1.4) by Lisa Renee Jones│Review 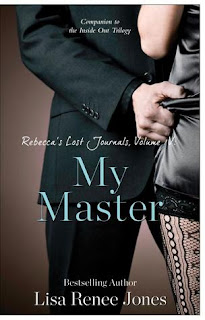 In this set of journals, we get to see Rebecca's backbone. She has seen most of what her "Master" is offering. She has realized that she has lost herself while becoming what he wanted her to become.

She starts to put her foot down and dare I say she uses her "Safe" word. She takes some space and starts to become her old self. Someone who she worked hard to become and doesn't SUBMIT to anyone.

She loves her Master, but she realizes that he can't love her in the same way. She believes he cares for her deeply, but isn't willing to make the sacrifice of changing his lifestyle to be with her.