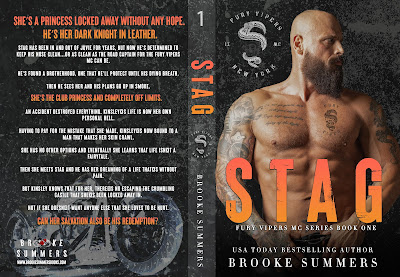 Stag has been in and out of juvie for years, but now he’s determined to keep his nose clean… or as clean as the Road Captain for the Fury Vipers MC can be.

He's found a brotherhood, one that he'll protect until his dying breath.

Then he sees her and his plans go up in smoke.

An accident destroyed everything.  Kinsley's life is now her own personal hell.

Having to pay for the mistake that she made, Kinsley's now bound to a man that makes her skin crawl.

She has no other options and eventually she learns that life isn’t a fairytale.

Then she meets Stag and he has her dreaming of a life that's without pain.

But Kinsley knows that for her, there's no escaping the crumbling castle that she’s been locked away in.

Not if she doesn’t want anyone else that she loves to be hurt.

Brooke Summers is an USA Today Bestselling Author. A Londoner born and raised. She lives with her husband and their daughter. She’s a foul mouthed, dirty minded weirdo. An introvert and would rather spend the night in front of the fire reading, rather than going out and partying.