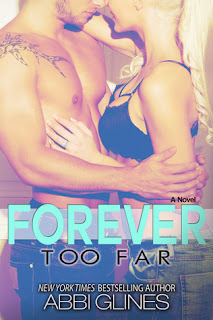 Rush promised her forever...but promises can be broken.

Torn between his love for his family and his love for Blaire, Rush has to find a way to save one without losing the other. In the end one has to be more important. Letting go isn't easy.

Blaire believed in her fairytale...but no one can live in a fantasy.

Her love for Rush and desire to have a family keep her believing that they can find a way for this to work. Until she has to make the right decision for her and the baby. Even if it breaks her heart.

Can they find the forever that they both want or has it all just gone...too far?

This book couldn't have been written any better than it was. There are new stories as well as old ones being tied up. I think there was a lot of growth for several characters including more growth of Blaire and Rush in this book.

Rush has to deal with not only his mother, but Nan and the entire situation that had been started in Never Too Far. I am really proud that he stayed true to himself and not let others play on his emotions and manipulate him more than they have in the past!

The wedding song was a nice touch *you can purchase on iTunes* which made their wedding all the more special.  Something old, something new, something borrowed and something blue...I fell in love with Rush even more. He has truly shown his true heart in this one and I'm glad that we get to see more of this side of him.

It's sad to say goodbye to Rush and Blaire, but I know we will see them again in future books in this series.

I gave this ♥♥♥♥♥ out of ♥♥♥♥♥ on Good Reads and would recommend not only this book, but the entire Rosemary Beach Series.